A London artist’s spin on chocolate is giving new meaning to one of my favorite lines: “Lick my chapped ass!”  It’s also providing a rather “out of the box” gift idea that’s anything butt (pun intended) half-assed. See for yourself: 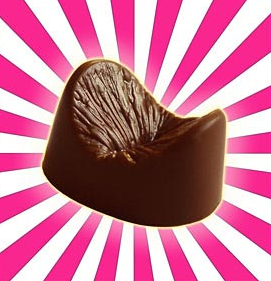 Who comes up with this shit?

Magnus Irvin is the brainchild behind the Edible Anus.  Made from pure Belgian chocolate, it seems like nothing more than a chocolate butthole!  Edible Anus puts it a little more seductively, describing the nougat as, “rings of succulent chocolate cast and crafted from the posterior of our stunning butt model.”

Puts ideas in a bottom’s head, doesn’t it? I mean, what’s more personal than giving the top(s) in your life (clearly, I don’t judge) a little piece of your derriere for Valentine’s Day?  Hmm?!  They’ll melt in his mouth like you do in his arms right before he sticks it to you.  If nothing else, perhaps it’ll serve as a friendly reminder that… well, I’ll let the DJ in my head finish my thought:

I digress.  I can’t help but wonder what all this means for Papa Smurf though.

Apparently Irvin picked up Edible Anus’s so-called “butt model” (or as I would much rather prefer, “buttocks model”) much like queens sample the fresh fruit in the produce aisle.  She’s some random he plucked off the street, specifically at a bus stop. That’s after a failed attempt when Irvin tried casting his own ass with rather “messy and disastrous results.”

Now, if that puts a bad taste in your mouth, Edible Anus can also immortalize your anus in solid bronze.  You’d better start shitting gold though.  It costs $1900.00.